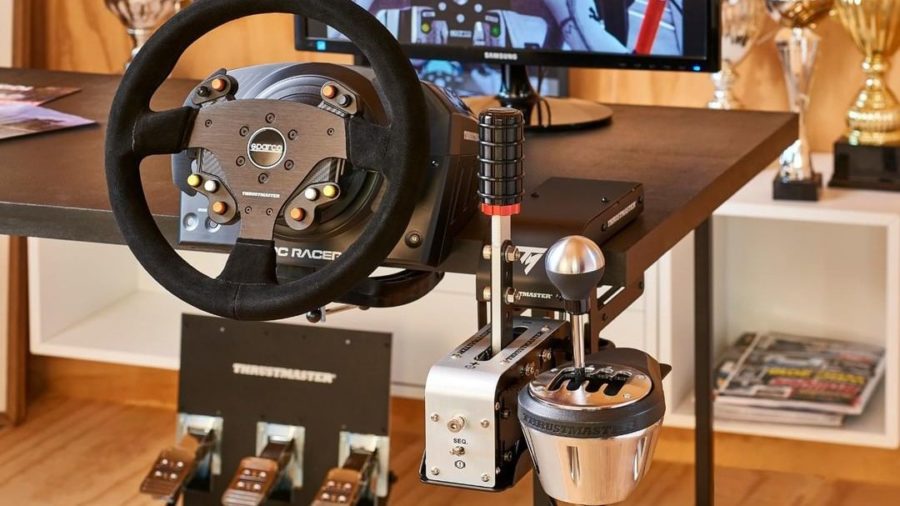 After about a year of relying on paddle shifters, I finally decided to treat myself with a shifter add-on for my sim racing setup. The paddle shifters on my racing wheel were doing absolutely fine but I was looking for some extra immersion. I am a huge fan of rally games, and I really love sequential shifters.

For someone eyeing a shifter add-on for their racing wheel, there are two major contenders in the market – Fanatec ClubSport Shifter SQ V1.5 and the Thrustmaster TH8A. Both Fanatec and Thrustmaster have been producing great sim racing hardware for a long time.

Appearance wise, both the shifters certainly look premium and completely justify the price. The Thrustmaster TH8A has a really long gear stick, 13cm long. It can be a good or a bad thing depending on your race style.

In comparison, the Fanatec ClubSport shifter seems to have a much more promising build quality. It is completely made out of metal and the black finish also adds a lot to the aesthetic. The Thrustmaster TH8A isn’t too bad either, it has a solid build quality for the price.

Both the shifters will easily last you a lifetime, no doubt. However, given the kind of force that I shift with in Dirt Rally, I would pick the Fanatec ClubSport SQ over the Thrustmaster TH8A any day. It outright feels like the kind that would take a beating without a problem.

After spending a good amount of time with both the shifters in Assetto Corsa and Dirt Rally, here’s what I think:

As an H-pattern shifter

I tested both the shifters in H-pattern mode while cruising on several freeways in Assetto Corsa, and both of them come very close. The Fanatec shifter takes the lead in resistance, although. It feels much more responsive and heavier when snapping into gears quickly. The gear stick on the Thrustmaster TH8A feels smoother and less realistic in contrast.

As a Sequential shifter

Switching between H-pattern and Sequential mode

The thing about shifters that is often overlooked, the switch between different modes. How much effort does it take? How long does it take?

The Fanatec ClubSport shifter can change modes with just the flip of a switch! If you’re a versatile racer who plays several titles and does not like wasting time, the Fanatec shifter is a lifesaver.

Both the shifters work perfectly on PC when connected to wheelbase/pedals of the respective brands with the help of the included DIN cable.

If you wish to use the shifter as a standalone device (to make it work with any racing wheel irrespective of brands), it needs to be connected via USB. Thrustmaster includes the USB cable in the package whereas Fanatec sells you a separate USB adapter to make it work.

In a handful of games like Assetto Corsa, Dirt Rally, DiRT 4, WRC 7 and SLRE, both the shifters work perfectly fine as a standalone device when plugged into the PS4’s USB port and mapped correctly in game.

Fanatec ClubSport Shifter SQ V1.5 is compatible with all Fanatec racing wheels on Xbox One.

Compatibility hack for console racers: To use a shifter from a different brand with a different racing wheel on the PS4 or Xbox, you can get the DriveHub. DriveHub is an accessory that can make basically any racing wheel and any accessory work on any console, PS3/PS4 or Xbox.

Another often overlooked part about sim racing shifters is the mounting. Given how much these shifters weight, a major part of your shifting experience solely depends on how you mount it. Both the shifters come with basic threaded screw mounts, which are not good enough in my opinion. To make the best out of a shifter, hard mounting it onto your desk or seat is the best idea.

The TH8A comes with a table clamp preinstalled on the case of the shifter whereas Fanatec sells you a separate table clamp. If you have a cockpit or racing seat that you’ve already invested in, with either shifter, you will have to turn to third party mounting options to make things work.

Other shifters you should take a look at

The Fanatec ClubSport Shifter SQ V1.5 wins the contest with it’s great build quality and tactile shifting mechanism. Bringing price into the picture, the Thrustmaster TH8A shifter isn’t terrible either. For someone just starting out, it offers a lot of features for a much lesser price.

To make the decision easier for you – If you already have a great sim racing setup and you want to complement it with a great shifter, get the Fanatec Clubsport shifter. On the other hand, if you’re running mid-range hardware and there is something more important the allotted budget could be spent on, the Thrustmaster TH8A is a great shifter for your money.

Can I use Fanatec shifter with a Thrustmaster racing wheel?

Can I use Thrustmaster TH8A shifter with a Fanatec racing wheel?