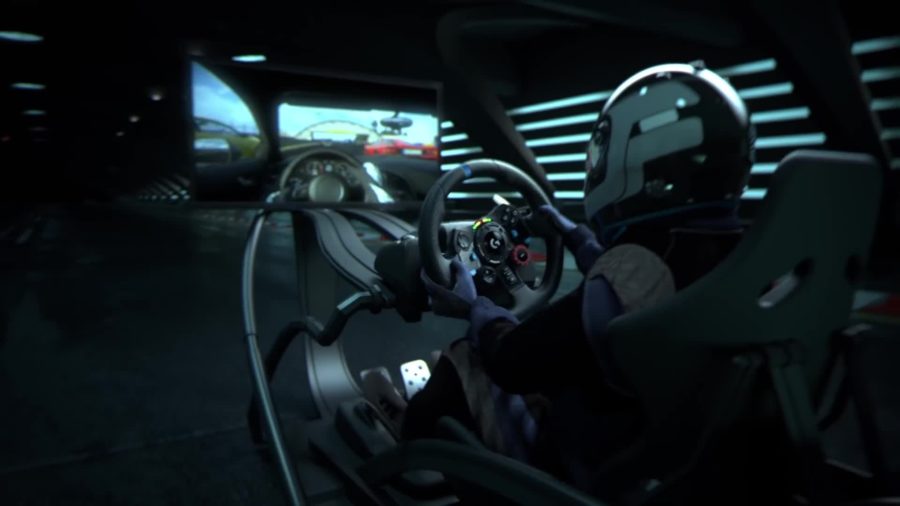 I’m sure you’ve heard of the term Force Feedback thrown around by sim racers, enthusiasts and pretty much everyone who plays racing games with a steering wheel. Everyone says you gotta have the force feedback, knowing that it’s connected to how the game feels, but no one explains what it actually is and why it’s so important in a racing wheel.

What is force feedback?

It’s all about realism and immersion.

Force feedback is a simulation technique used in racing wheels to provide the driver a true to life feeling, i.e. what a driver would observe and sense when driving a real car on the road.

The most basic type of physical realism is how your controller vibrates in response to the things happening in game. Force feedback is a high end version of the same concept which can accurately simulate real world things like understeer, oversteer, weight of the car, slippery roads, jumps and much more.

How does force feedback work?

Force feedback simulation is achieved with the help of several electric motors inside the steering wheel. The motorised motion creates resistance in accordance to what’s happening on the screen. The intensity of resistance changes as you turn the wheel, or with conditions such as a slipperiness, dirt or bumps in the road.

For example, if you drive the car off the road onto the dirt, the electric motors will create a sudden resistance with the help of a mix of vibrations. To drive the car back onto the road, you will have to fight against the wheel and turn it in the opposite direction. This is how a feeling of realistic driving is attained with force feedback.

Why is force feedback important in a racing wheel?

The extra dimension of physical signals, interactions and opportunities that you experience with a force feedback wheel leads to a new extent of communication with the game. With added communication, you feel much more immersed. A high level of immersion combined with the accurate steering movement allowed by a wheel helps achieve the simulation of real driving experience from your living room.

More ways to add immersion to your gameplay:

Not all force feedback racing wheels are the same

While almost all racing wheels have some kind of force feedback, this does not mean you should go out and buy any racing wheel that has it and expect to seek the best gaming experience.

What are the different types of Force Feedback?

There are three popular types of Force Feedback systems to choose from. The most common and cheapest of the three are Gear Driven steering wheels which are popular for a lot of beginners and sim racers on a budget because of their welcoming price point.

Gear Driven racing wheels utilize a small motor attached to a series of gears to simulate Force Feedback effects while driving. The disadvantage of gear-driven wheels is that they’re usually clunky due to the metal-to-metal contact of the spinning gears. Nevertheless, it’s a great first sim racing wheel product for beginners due to its low cost making it an ideal peripheral for casual racers before deciding to invest or upgrade to a more expensive racing wheel.

Belt Driven racing wheels meanwhile are usually considered by a lot of gamers to be the sweet spot peripheral due to their reasonable price and performance. The majority of steering wheels on the market right now are Belt Driven giving you a lot of options to choose from. Similar to gear-driven wheels, it utilizes a small motor with a belt and pulley system to generate Force Feedback effects. This system produces more torque and stronger Force Feedback than gear-driven wheels which means they’re almost always better than a gear-driven wheelbase. The primary drawback of belt-driven wheels are the belts usually wear and stretch over time resulting in the failure of the product in the long run.

The last type of Force Feedback is Direct Drive where the wheels are connected directly to the wheel shaft. They’re the most expensive of the three and they’re marketed mostly for hardcore sim racers or people who don’t mind spending over a grand for a high-end Force Feedback system. Direct Drive wheels are the best peripherals in providing total immersion and true-to-life driving technology has to offer for gamers to enjoy the latest in racing simulation. There’s really no other disadvantage of getting a Direct Drive racing wheel other than its expensive price point. If you’re ready to invest in a racing wheel that you’ll be using for years to come, definitely save up for a Direct Drive wheel.

How realistic is force feedback?

If you’re expecting force feedback to create a 1:1 simulation of real life driving, you’re being overly optimistic. To accomplish that, technology still has a long way to go.

Force feedback aims to create the most enjoyable driving experience. Realistic simulation does not necessarily mean it’s enjoyable. Every person has a unique driving style and the term realistic is subjective.

Force feedback racing games provide a plenty of options like: understeer, vertical load, vehicle weight, spring, damper, slip effect and many more. You can adjust each of these settings to the intensity of your liking to achieve your definition of the term “realistic”.

Is force feedback worth it?

Depends on how realistic you want your sim racing experience to be.

An ultra realistic expensive force feedback wheel is probably not worth it unless you’re a professional racer.

For most people, spending a couple hundred bucks on a belt driven force feedback wheel is completely worth it.

When was Force Feedback created?

For the curious, Force Feedback for video games started appearing during the heyday of the PlayStation 1 console. Sony’s DualShock started to gain notoriety for the first time when the controller vibrated during a shotgun blast when playing shooter games or when you bounced onto a curb while playing a racing game on the platform. Since then, Force Feedback is often associated with video games and VR experiences nowadays and is even starting to get more popular today as the weeks go by.

In reality, Force Feedback first appeared in the 1960s and was created for nuclear research laboratories with the intention to study and experience the forces in play on certain industrial processes. It doesn’t actually have anything to do with video games even when they first emerged in the ’60s. Force Feedback effects are also implemented in the aircraft industry to respond to negative flight scenarios.

How does Force Feedback affect gameplay?

Whether you’re a beginner or a professional sim racer, you’ll immediately notice the difference when playing with racing wheels equipped with Force Feedback effects as it enables you to react faster and more accurately when compared to a controller. Steering wheels with great Force Feedback effects allow you to feel the difference between huge turns or small intricate turns when driving or when you’re slipping into under or oversteer.

With practice and repetition, playing with a racing wheel can make you faster than other racers especially when competing online as there’s no lag between what you see and what you feel. Steering wheels with the best Force Feedback effects also simulate the same levels of force as that of a real race car making immersion truly enjoyable in terms of gameplay when playing your sim racing games.

How do the Three types of Force Feedback compare?

Racing wheels that utilize gear or belt-driven Force Feedback effects will suffer from a loss of force feedback detail regardless of the type and brand of the wheel you’re using. There is no escaping this as a smaller motor connected to a system of gears or belts means there will always be a tiny bit of lag during gameplay. However, this doesn’t mean that these two aren’t suited for competition as they’re still the most popular and reliable wheels on the market today.

Direct Drive Force Feedback, meanwhile, doesn’t really need any more explanation as we’ve already discussed its ability to deliver the level of detail needed in terms of delivering realistic gameplay. It produces a true 1:1 detail compared to 20:1 for gear and belt-driven wheels so Direct Drive wheels are simply the best type of technology today for fans of sim racing.

Should I be worried about Force Feedback clipping?

When you’ve reached the peak of your steering wheel’s turn but the wheel can’t match what’s happening during gameplay, then you’ll experience Force Feedback clipping. This issue makes you lose grip on the tires which means you’ll have trouble or even lose control while driving.

It’s recommended to reduce the Force Feedback levels on the racing sim if you often find yourself in these types of situations. Racing wheels that have a higher peak torque are also less likely to experience clipping as they can handle more force during gameplay. There are a lot of steering wheels that have dedicated LED displays nowadays built on the wheel itself that shows Force Feedback clippings if it’s happening during a race.

You should definately get a force feedback wheel if you can