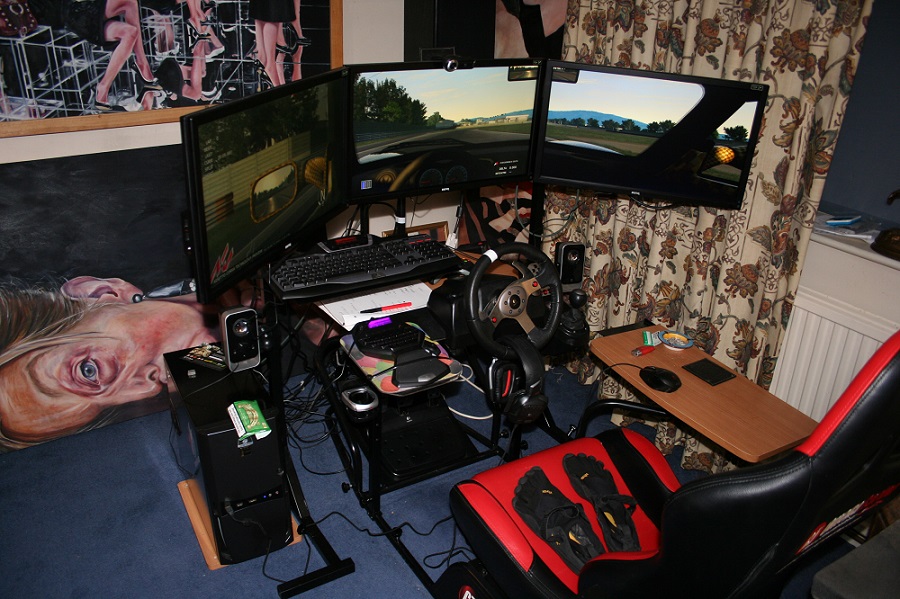 Sim racing is one of the most intense gaming experiences available on a PC, but having the correct displays is crucial. You need a monitor that is both crisp and responsive, as well as capable of being installed as part of a multi-monitor setup.

It might be difficult to choose the monitor (or monitors) that will function best with so many various displays and design requirements and components. This is even more complicated by the existence of televisions. If you enjoy gaming, you’ve undoubtedly considered whether you should buy a TV or a monitor for sim racing. Fortunately, we’ve put together this guide to walk you through the benefits and drawbacks of each gadget so you can make an informed decision on what to purchase.

Should you get a TV or monitor for sim racing?

A gaming monitor will provide a superior gaming experience for dedicated sim racers due to its often faster response time and higher refresh rate. With that stated, if you’re a more casual racer looking for something to kick back and play games on in the living room, a more adaptable TV could be the way to go.

What are the advantages of using a monitor instead of a TV for sim racing?

One of the most crucial considerations you’re undoubtedly considering is which of the two is cheaper; yet, with so many models to select from, the answer isn’t so simple.

In general, a mid-range 4K monitor will be less expensive than a similar 4K TV from the same brand. A TV, on the other hand, gives you a larger screen and a few more functions for your money, such as the ability to watch television and, if you have a smart TV, the ability to stream movies, view YouTube videos, and even screen share from your smartphone on some devices.

TVs also come in a broader range of larger sizes, making them more useful if you’re seeking for something to use for more than simply sim racing. If you have one of the top sim racing chairs or a full cockpit setup, the smaller sizes of gaming monitors may be preferable because they will fit more neatly into your desk or racing rig stand.

One of the most significant advantages of a gaming monitor over a television is that it generally has a faster refresh rate and reaction time, which is critical for keeping up with the fast-paced action of racing games and assuring a stutter-free gaming experience. In comparison, most current TVs will have a 60 or 120hz refresh rate, which should still be adequate for racing but is slower than some of the mid- to high-end gaming displays.

Is it better to play games on TV or monitor?

In comparison to televisions, monitors feature less input latency, faster reaction times, and better refresh rates. They’re more responsive, and you can use them to compete in console games. Monitors are also a good purchase if you want to play both PC and console games.

How to find the right monitor for Sim Racing ?

A few display trends make perfect sense to a regular PC gamer but not so much to sim racers. That is to say, most games, such as shooters, role-playing games, and adventure games, are often played while seated at a desk, and so the displays for these games are intended to make desk-playing as comfortable as possible.

Unfortunately, while there is no doubt a large demand for these sorts of gaming monitors, which is understandable given that they account for the majority of the market, those appropriate for sim racing are few and far between.

It makes sense since, in comparison to those other gaming genres, sim racing, while it has seen a surge in popularity in recent years, remains somewhat specialized. This makes acquiring a monitor a bit more difficult than, say, if you wanted to play something like Tomb Raider. But, assuming that’s the case, what monitor would be best for sim racing?

The solution comes down to one important factor: field of view (FOV). Essentially, FOV refers to how much of the game can be seen at any given moment through your display. Sim racing, in essence, needs a wider field of view than many other gaming genres in order to replicate what it’s like to be in the driver’s seat of a real automobile, where your field of view is around 180 degrees. That means you’ll need a monitor that enables you to look through your side windows and mirrors to see the full windscreen as well as what’s alongside and behind you.

When racing, what’s in your peripheral vision is frequently just as essential as what’s immediately in front of you, so you should get the impression of being totally involved in the game, with the display wrapping around you.

Sim racers have a couple different choices for achieving this FOV. You have the choice of using an ultrawide monitor or a triple-screen arrangement. While ultrawide monitors have a smaller field of view than super ultras, users with 34-inch displays can still utilize the cockpit view in a racing game and see the whole windscreen, as well as enough of the side windows to see the side mirrors and see cars approaching from behind. With that in mind, it’s reasonable to assume that anything less than 34 inches won’t make the cut.

Should I select a single, triple-screen or ultrawide gaming monitor?

It’s entirely up to you whether you want a single or triple-screen setup. Triple-screen monitor configurations assist boost sim racers’ immersion and awareness of their surroundings by expanding the visual area around them.

To demonstrate, consider how the correct field of vision might appear on a single-screen simulator. You’ll probably only be able to see what’s directly in front of you, with your vision confined to the breadth of the car’s glass. It’s drivable, but racing in close quarters is, to put it mildly, unpleasant.

Everything seems a little more natural when you add two more displays. In the automobile, you can view the side mirrors and get a greater feel of what’s going on around you, much like in a real car.

Increased immersion, on the other hand, always comes at the expense of performance. You can also widen your field of vision with a single screen by using an ultrawide or super ultrawide monitor, but you won’t get the same level of immersion that three displays can provide.

Is a curved monitor good for gaming?

A curved monitor with an ultra-wide 21:9 display will deliver more immersive images and a broader field of vision. However, because there are no other intrinsic benefits, determining whether or not a curved gaming display is genuinely worth the money is purely subjective.